Controversial gospel artist Willy Paul went off on a fan who referred to him as a gay man.

Though in good moods, the Hallelujah crooner asked the Instagram user only identified as Wambopt, to refrain herself from making claims without evidence. 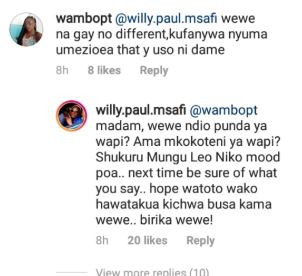 Willy Paul has in the past told off online trolls and fellow artistes who just like his fans, are not sure about his music.

“I have no time for idle people. No, I won’t be pulled into such things. I am releasing songs, music for my fans, and the response is good. This is what I want people to discuss. This is the talking point not the sideshows,” he said.

The artiste was last weekend left tongues wagging after videos and images surfaced online as he danced with female fans.

What had the people talking was the amount of grinding that was going on at the masquerade party held at Wakanda club, Westlands.