This comes at a time when people are reportedly dying of hunger in Baringo and Turkana counties even as the government rubbishes the reports.

According to the DP, media reports indicating that at least 20 people have lost their lives are fake news.

In fact, the DP said, “the situation is better than last year and year before. We are in a better place in terms of vegetation, livestock and food prices.”

The state he said has disbursed Sh2 billion for food and water supply to mitigate effects of drought in the country.

“We are not behind schedule to the situation as a government. The food situation is stable and prices within acceptable margins,” he said.

Mrs Ruto was under fire as some accused her of being hypocritical. They asked her to pray for the DP who has been adversely mentioned in graft scandals.

Others noted that what ails Kenya will not be solved by prayer only.

Here are the comments:

I don't know how to put this politely ma'am. Prayer SHALL NOT solve the problems that have been created by our politicians. You can take that to the bank. If you don't believe me, ask Wabukala how successful his 'religious approach' to handling corruption has been. Thank you.

Kindly be our mouth piece. These leaders are very near you..You are in a very privileged position and like Modecae asked Esther; Who knows why you are in such a position a time like this? Please do something to alleviate the sufferings if many..

Charity begins at home,pray for your husband kwanza and i hope you won't be praying for rains and hunger venye umezoea. Kenyans need food.

She was also a victim of fake news on Wednesday after Dennis Itumbi posted images indicating that she had delivered relief food to Turkana.

The images were however from 2014.

Itumbi apologized for misleading the public.

“I relied on unverified images. This was my mistake and I am sorry. I have since deleted them. May the record reflect the true position and my apology too.” 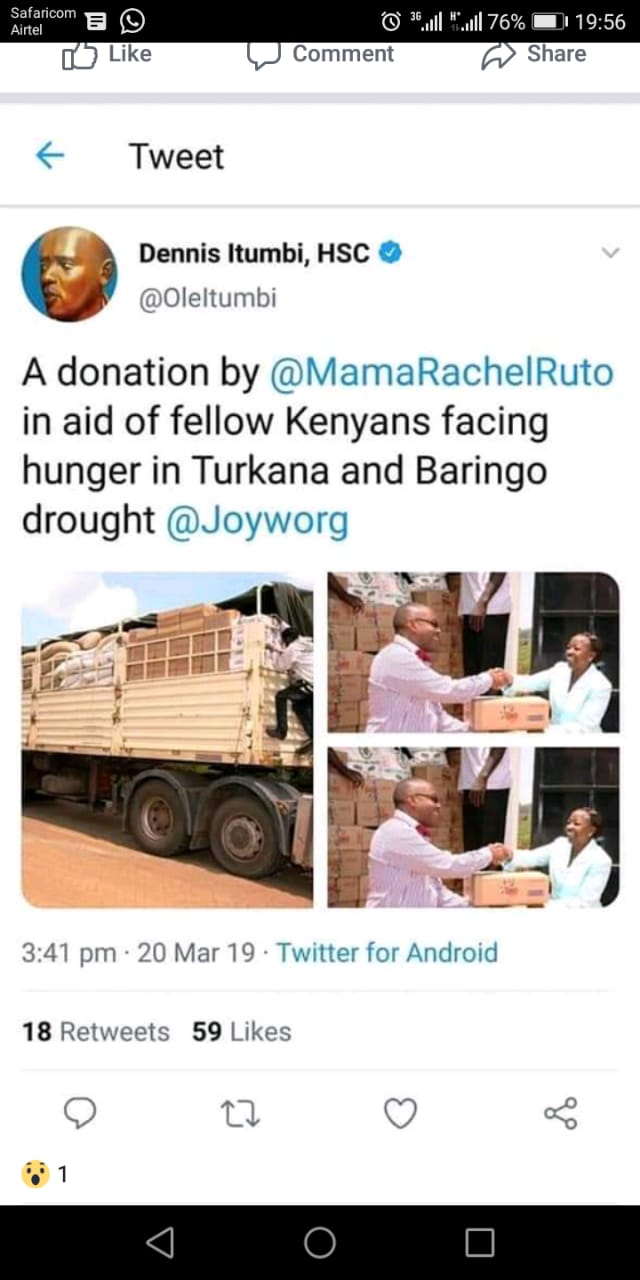