Kenya was in a crisis in 2007/2008. Kenyan techies led by Ory Okolloh thought of an idea to bring all the crisis reports of the same together in a tech manner. The main reporters were not so much techies and so they needed the most basic way to do it. The most common way then and now still is basic sms in a cheap cellphone. 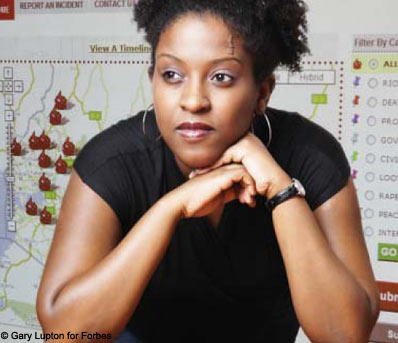 The Ory Okolloh and team thought that they will do with the basic sms, email and web reports and bring them all together in a map. That is how Ushahidi came to be. I got my first email inviting me to the platform in 2007 Dec. In 2008 january, there was a very heated exchange between Bill kagia and John Walubengo in Kictanet mailing list.

Well Forbes did a post on Ushahidi on 8th December 2008. That changed everything. Ushahidi started to be a serious player and many off-shoots were born. It was deployed in DRC, Haiti, India and many other places. What remains a fact is that Ushahidi is not such a complex system. It has never been such a deep code which only the few could crack. NO. It is a very simple API deployed and improved upon by many volunteers and coders. The unique thing about Ushahidi is the fact that Ory Okolloh led it.

Out of Ushahidi’s good heart and also Ory’s leadership, Kenyan techies have iHub. Is that not worth a clap?

Ory is no ordinary lady. She has thousands of ideas floating in her head and she will look for the most cost effective way to develope them. I can bet that if anybody else was in charge of Ushahidi, the story might be very different.

So I got this blog post on Kenyan Pundit by Ory about her leaving Ushahidi and joining Google Africa as the (a) Policy Manager for the same in the continent. On October 20th 2010, we listed Ory Okolloh as one of the ICT heads which helped shape the Kenyan tech scene. She is one of the 12 Mashujaa (Heroes) we did celebrate.

We wish you well Ory. I have never been full of praise for you but you must know that where you dared do wrong, I was and will always be the first critic. But when you win my heart, I will always say so. You did techies proud and the great thing is that you didn’t touch more of the rich’s heart. You touched the soul and future of the young men and women who needed guidance.

That must be appreciated.