Meta will require the real identities of people placing political ads on Facebook and Instagram before they are published. The company said it would utilize its resources and tools targeting political advertising ahead of the August 9 polls to enhance integrity and transparency.

The transparency will help voters know the identity of the people behinds ads placed on the Meta platforms. It will also give the politicians and political advertisers key resources to reach and engage supporters and potential voters throughout the election period.

According to the social media giant, advertisers who wish to run political ads in Kenya will undergo a verification process to prove their identity and that they actually reside in the country. The company will also run compliance checks with its policies before running the ads with a “Paid for by…” label. 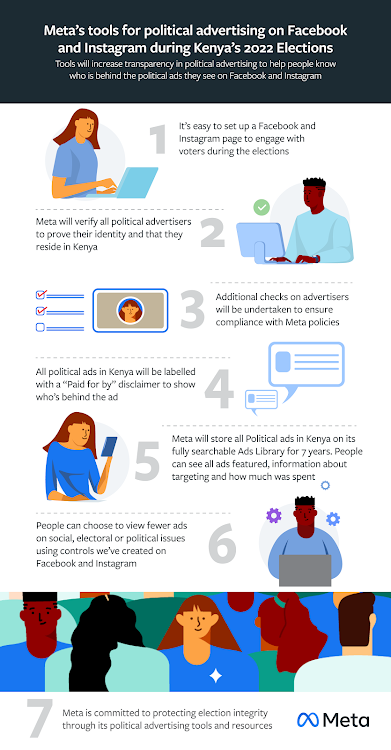 In addition, the firm will post political adverts that run in Kenya on its Ads Library so that voters can know what ads are running and get information on who is being targeted, and how much money was spent.

According to the Meta Public Policy Director for East and Horn of Africa Mercy Ndegwa, the ads will be available in the fully searchable archive for seven years.

“Meta has continued to invest in technology towards election integrity. We believe political discussion and debate should be transparent to every voter, which is why over the past few years we’ve introduced a number of tools that provide more information about political ads on Facebook and Instagram,” she said.

Last year, Meta said that it will be introducing new controls that would allow users to opt out of seeing adverts related to social topics, elections, and politics.

People who employ these controls will no longer see advertising with a “Paid for by” notice, according to the company.

Back to Top
Close
Instagram Rolls Out Chronological Display Feed

Spotify Live Audio Product is Reportedly Coming to the Main App
Go to mobile version
%d bloggers like this: