The administration of Kaiboi Technical Institute in Nandi have ordered an indefinite closure of the school following student unrest.

The students took to the streets following the death of a female student who was killed by her male colleague, whom she jilted.

In a notice seen by Kahawa Tungu, the institution management noted: “Due to students’ unrest arising from an assault of a female student by a male student, it has become necessary to close the institute until further notice. ”

The notice, which was signed by the Principle, C. Koech, then asked the students to vacate the institute’s premises immediately. 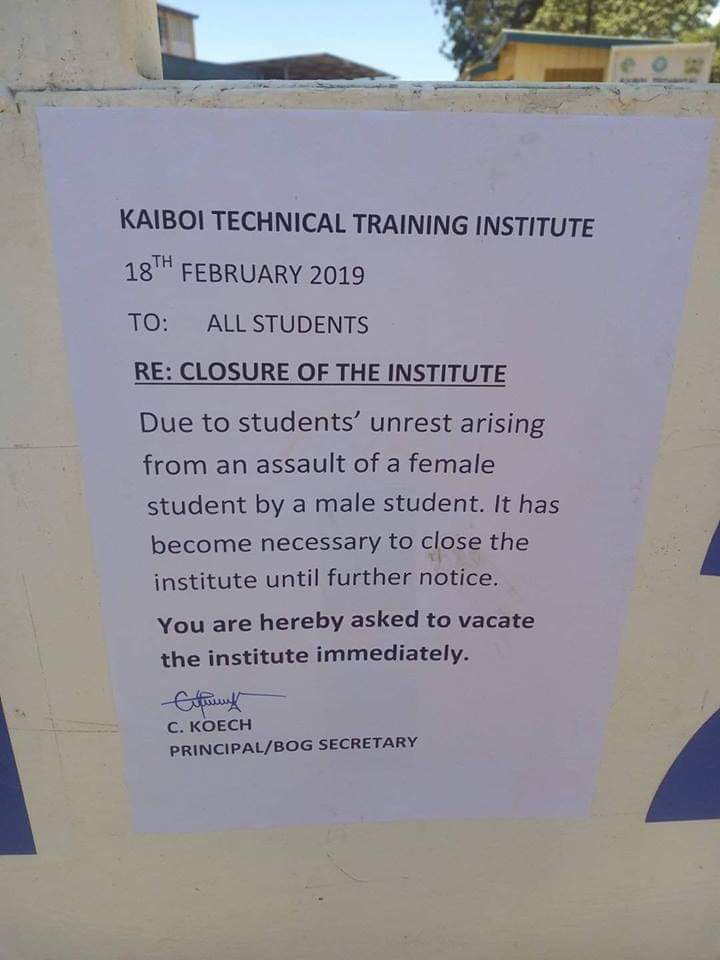 In a similar incident, Police in Ndiwa sub-county in Homa Bay have arrested a 16-year old secondary school student who killed her boyfriend.

The girl was arrested in her village after she killed her boyfriend, 21, with a kitchen knife.
The suspect is a form three student at Ndhiwa boarding school and ,had just come come for half term while the deceased , Dennis Manyuro, was a casual labourer at a local farm owned by the uncle of the suspect.

According to the police, the deceased had stab wounds in the chest, suspecting that the knife may have pierced his internal organs.

Dennis is said to have died on the spot.

Homa Bay County Police Commander Esther Seroney mentioned that investigations into the death have been launched.

“The knife that was suspected to have been used to kill the man was subjected to forensic analysis.

“The results of the test has established that it was indeed the weapon used in the murder,” she mentioned.

The suspect will be arraigned in court to face murder charges.