An irate Jacque Maribe told off a fan who dragged her name in a discussion surrounding her ex fiance Joseph “Jowie” Irungu.

Jowie and Maribe were in September 2018 arrested and accused of killing a businesswoman Monica Kimani.

But Maribe was in a month later released on a Sh1 million bail or a Sh2 million bond while the first accused person has without luck tried getting bail.

Read: How Citizen TV Bosses Threatened Jacque Maribe To Resign, Or Be Sacked

A fan identified as Wambui Glory wondered why she (Maribe) was granted bail as her ex lover was left to rot behind bars.

“Not that he deserves justice. He deserved a bail and he’s innocent until proven guilty. Monica deserves justice too but it was unfair kupea Maribe bail waache huyu,” she wrote. 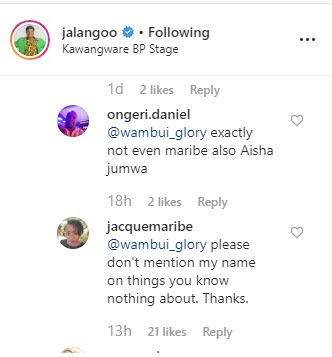 To this, the former Citizen TV anchor and reporter responded, “Please don’t mention my name on things you know nothing about. Thanks.”

The comments appeared under a picture posted by Milele FM’s Jalang’o. He captioned it, “This was a good day….@jowie.jowi. Keep holding!”

Earlier on in the month, Embakasi East MP Babu Owino led calls for Jowie’s release who is being held at Kamiti Maximum Prison.

Babu argued that it is unfair that the former security agent is still locked up while others facing similar charges get to walk away scot-free.

He cited Migori governor Okoth Obado’s case in which he is accused of killing his girlfriend Sharon Otieno and that of Sarah Wairimu Cohen who is also being probed for murdering her husband and golf magnate Tob Cohen.

When denying the accused bail, Justice James Wakiaga described him as the male version of a slayqueen without a place of residence or assets hence posed a flight risk.