The second Google for Nigeria event happened, and the search giant announced more products and programs aimed at helping more people get online.

Africa might deliver the next biggest growth of the internet as web access is still only at 35 percent for the continent, compared to 48 percent in Asia, 67 in Latin America, 85 in Europe and 95 in North America. Many internet users in Africa don’t have Wi-Fi in their homes, relying instead on the few, unreliable and mostly unsecure public Wi-Fi hotspots to connect, communicate and learn.

In partnership with 21st Century, one of the fibre network providers in Nigeria, Google is also announcing the launch of Google Station in the populous West African country. Google Station is aimed at providing high-quality, high-speed Wi-Fi hotspots.

Google Station will be rolled out in 200 locations in five cities across Nigeria by the end of 2019. Some of the targeted sites include markets, transport hubs, shopping malls, universities and more. Nigeria is the fifth country in which they are launching Google Station, after India, Indonesia, Thailand and Mexico. 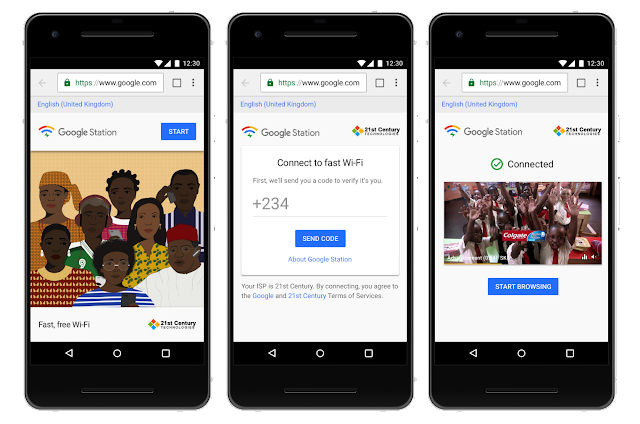 First launched in April, the search giant also announced the launch of new features in Google Go, an app that makes it easy for people to discover the best of the internet, even on low-RAM smartphones or unstable network connections.

The new feature on Google Go reads webpages out loud and highlights each word so you can follow along. Google announced that it will be available for billions of pages and in 28 languages in the coming weeks.

Google Search & Maps: Helping you find what you need

The previously launched Google job search is expanding to another 32 countries in Africa. In Nigeria, they also launched a new Search experience that allows you to explore health conditions based on symptoms ability to experience new cooking recipe for popular meals like Jollof.

Coupled with that, with Google Maps Go users with low memory phones or unstable network connections will be able to use turn-by-turn directions whether they are travelling by car, by bus or on foot.

More Nigerian landmarks and natural wonders are also being made available on Google StreetView, so that users can discover more of the country. You can now virtually tour the National Museum in Lagos, Olumo Rock in Abeokuta, the Millenium Park in Abuja, Lekki Conservation Centre and many others—all from your phone.
Do you have a story you want told? Do you know of a sensitive story you would like us to get our hands on? Email your news TIPS to news@kahawatungu.com