Police are on the look out for a Twitter user spewing hate on the social media platform.

Dennis Kiptoo in a post that has since gone viral said that there will be ethnic clashes should Deputy President William Ruto not ascend to power come 2022.

He also urged the Kikuyu community to “pay their debt” to Ruto or risk a repeat of 2007/08 tribal clashes that left thousands dead and others internally displaced. 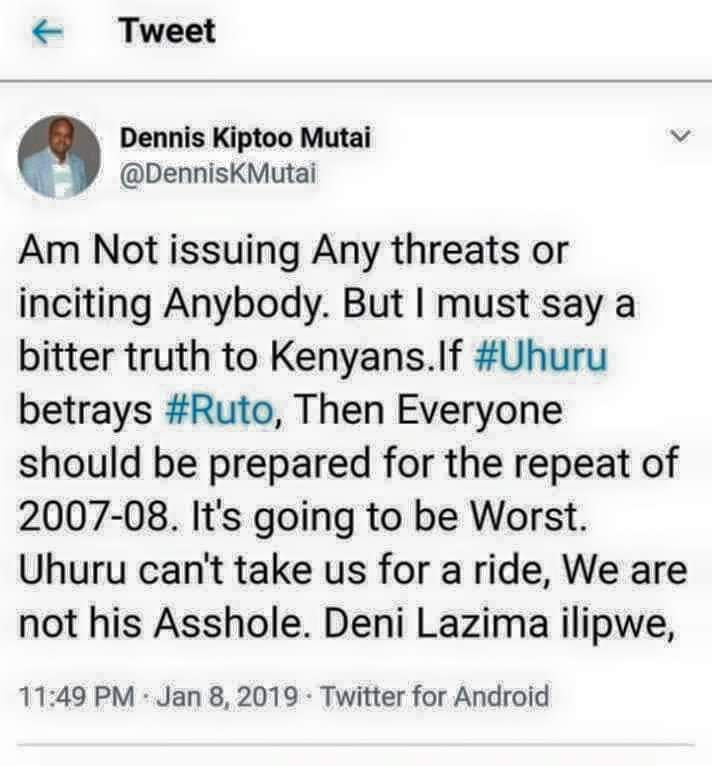 In a series of tweets the police have said that they are working with the National Cohesion and Integration Commission (NCIC) “with a view to dealing with the persons involved in accordance with the law.”

“Our attention has been drawn to some Tweets supposedly issued by a named individual issuing threats to ignite inter-ethnic clashes akin to what occurred in 2007/8 in parts of the country,” police said.

Our attention has been drawn to some Tweets supposedly issued by a named individual issuing threats to ingnite inter-ethinc clashes akin to what occured in 2007/8 in parts of the country. 1/2

“This is the most irresponsible utterance and must be condemned in the strongest terms possible,” he said on Twitter.

Kenyans have also called for Kiptoo’s arrest with some saying that his remarks are a recipe for disaster and a threat to national security.

There has been talk that the Kikuyu community might not back Ruto’s 2022 bid if the rift in the ruling party is anything to go by.

For example former Jubilee vice chair David Murathe has insisted that he is willing to seek an advisory opinion in the apex court to block Ruto’s bid or a mass walk out of the party.

He has also said that the “hustler” should be content with serving as the DP for two terms and retire together with President Uhuru Kenyatta.

The DP has on his part said that no community owes him anything and when the timing is right, will launch his bid.

Is The Jubilee House In Shambles? Senator Linturi Reveals Issues Stemming From 2013