Keroche Breweries heiress Anerlisa Muigai went in on her fans who did not have nice things to say about her new hairstyle.

Anerlisa asked her followers about her new curly wig which many thought looked cheap.

“This one no….looks like some cheap Dubois wig,” a fan said with another one adding “I always love your hair but this one it’s a big naay ain’t hating tho (sic).”

The Nero Water Company chief executive got upset when her fans urged her to ditch her current hairstylist, Jane who she has apparently been with over the years.

“To the beautiful @anerlisa sometime is good to outgrow people that’s what life is all about different seasons now you are on your next phase of life marriage season,” another one wrote.

An irate soon-to-be wife thought it was unfortunate how women are often their own enemy. She urged women to lift each other up instead of constantly bashing one another.

How Is My New Hair? @jaynestylist

She was also quick to note that she was never going to axe her stylist.

“Put your tags to rest on your hair recommendations. I am never leaving @janestylist for any other hair. My relationship with Jayne is beyond hair. I have watched Jayne come from a small corner to owning her own salon. It’s so sad that women are always quick to put each other down,” she wrote on Instagram. 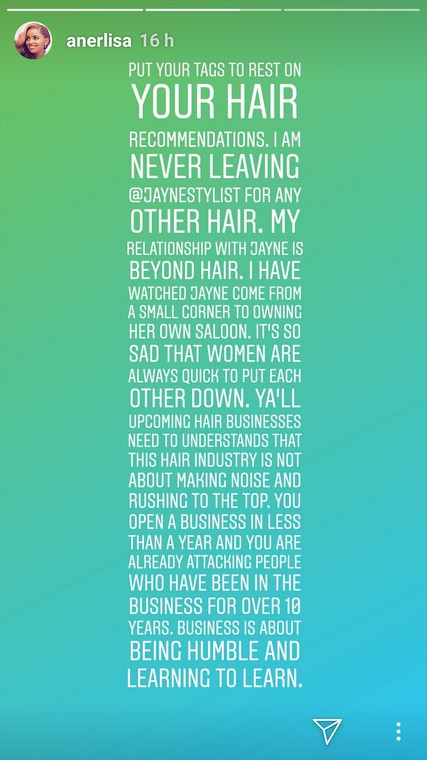 She also advised upcoming businesswomen to always endevour to learn from others instead of always “making noise and rushing to the top.”

“You open a business in less than a year and you are already attacking people who have been in the business for over 10 years. Business is about being humble and learning to learn,” she added.

Dela Off The Market As She Elopes With Longtime Boyfriend (Photos)

Wema Sepetu Complains Of Contracting Disease While Behind Bars